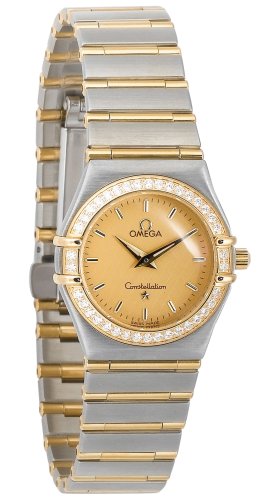 Blending refined European design with glittery diamond-accented style, this Omega Constellation women's watch offers graceful lines and a medium-sized width. Mixing both stainless steel and 18 karat gold, this Constellation offers an appealing balance of luxury, durability, and precision (with its Swiss quartz watch movement). And this watch will capture attention immediately as you walk into the ballroom (or boardroom) with shiny, fully diamond encrusted 18 karat gold bezel. The brushed silver stainless steel watch case flows seamlessly into the stainless steel bracelet band, which tapers slightly. It's accented by thin horizontal bands of 18 karat gold that separate the silver links and stretch fully across the width of the band. It's joined by a secure push-button safety clasp.

The Omega Story
The Omega watch story begins in 1848, when founder Louis Brandt began hand assembling key-wound precision pocket watches from parts supplied by local craftsmen in his principality La Chaux-de-Fonds, in the northwest corner of Switzerland. However, the Omega name didn't appear until 1894, after Louis Brandt had passed away and his watchmaking traditions were taken over by his sons, Louis-Paul and Cesar Brandt. Omega watches have long been associated with glamorous screen and sports stars--the Omega Seamaster is famous for being the watch of choice for James Bond--with current ambassadors including Pierce Brosnan, Nicole Kidman, tennis player Anna Kournikova, and swimmers Michael Phelps and Ian Thorpe.

But Omega is more than just a fashionable watch. In 1965, the Omega Speedmaster chronograph was "flight-qualified by NASA for all manned space missions" as the only wristwatch to have withstood all of the U.S. space agency's severe tests, including passing grades for extreme shocks, vibrations, and temperatures ranging from -18 to +93 degrees Celsius. The greatest moment in the Speedmaster's history was undoubtedly 20 July 1969 at 02:56 GMT, when it recorded man's first steps on the Moon's surface as part of the Apollo 11 mission. Today, Omega is known for its rigorous testing of new movements, cases, and bands. Each new Omega movement is tested on the wrist in existing Omega models, while various laboratory tests are conducted to determine temperature-resistance, shock-resistance and vibration-resistance. 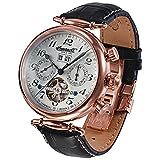 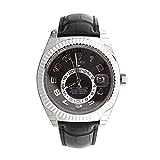 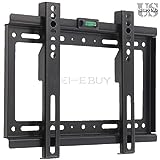 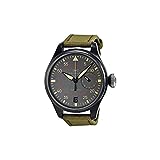